Off The Beaten Track: Discovering Dixie Across Millennia 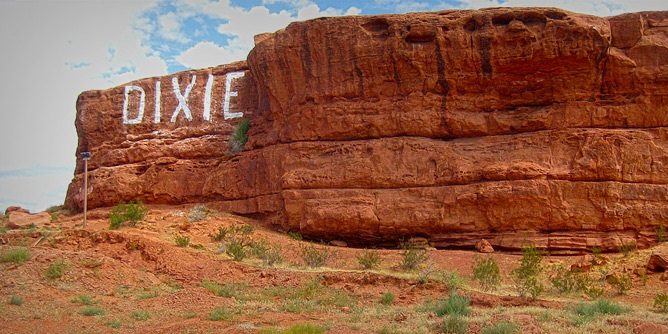 Dixie is a beautiful place in the heart of Utah. Millennia of rich culture and natural history has made Dixie the way we know it today. It is a perfect testimonial of nature’s playful yet artistic ways. It has preserved the evidence millions of years of rock formation, erosion, water flow and climate change. All in all, Dixie stretches from the horizon to the horizon, red and ragged, the perfect canvas of Mother Nature.

Dixie has also been the site of some exciting historical discoveries. From ancient mammoths or legendary dinosaurs, the fossils found in Dixie are varied. Each of them has a different story to tell. It is a place where millions of years coexist together, right now.

Experience the harsh beauty of Dixie

Due to the adverse climate, not many people have exploited Dixie. She keeps all the treasures and ancient tales protected inside for you to unfurl. It is a spectacular beauty that will moveany true nature lover. Exploring the sand flats on jeeps and ATVs is an otherworldly experience. If you have ever wondered what riding that rover on Mars would feel like, come to Dixie right now. The undiluted red expanses occasionally interrupted by giant rock formations, provide the perfect setting for a remake of The Martian.

The diversity of the landscape is quite confounding. Covering the entire sand flat on Jeep or UTV is a good idea since Dixie is renowned for its harsh sun and relentless heat. If you negate the hum of the engine, the landscape can transport you to a time when dinosaurs ruled the earth, and no one had thought of crossing the desert on an ATV.

The current archeological evidence shows that Dixie was the home to some tribes from 7000 BC to about 300 BC. The gradual change of landscape and climate made people abandon the rugged terrains for more forgiving landscapes. After the archaic times, the Ancestral Puebloans or Anasazi settled in these red sandy terrains.

Post1225 AD, the Anasazi vanished from these terrains much like their ancestors. Very soon, the Paiute settled along the rivers and sustained themselves by hunting for small games. The occupied the comparatively fertile land by the Virgin and Santa Clara rivers. They were mostly farmers who took to seasonal hunting when crops were short.

Very soon, the Mormons started infiltrating the land and displaced the Paiute tribes. This infiltration earned Dixie its modern name. The new way of life paved the way for en masse farming and grazing. The Honeymoon Trail and St. George’s Temple still stand tall as a witness of a time long past by. You can still see the rutted wagon trail cutting through Arizona Strip during your jeep tour through the desert lands of southern Utah.

Your time in Utah should be all about fun, family, and adventure. www.zionatvjeeptours.com, they always make sure that you get every bit of it.

Reviews from millions of Tripadvisor travelers place this Attraction in the top 10% worldwide.